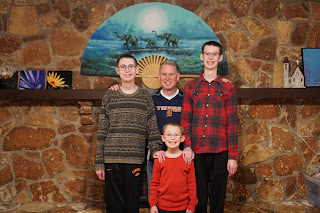 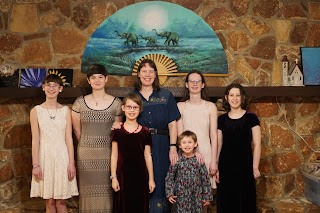 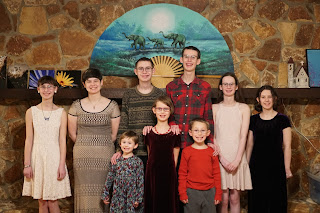 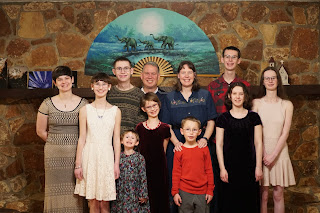 Posted by Laraba at 9:07 AM No comments:

Isaac and Naomi are enjoying a particular video game which is on one hand a strategy game, and on the other hand a rather graphic game about killing people.

It is fine for them, but not for their little siblings.

We told Isaac he could only use one particular computer to limit the chances of the little ones seeing the game.

It was not his favorite computer.

So he went to work. 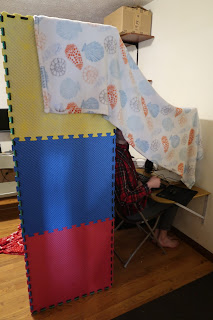 Try.  Kids could peer under the blanket. 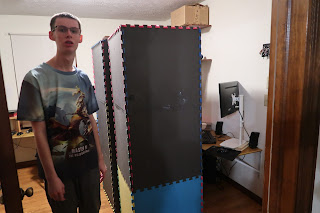 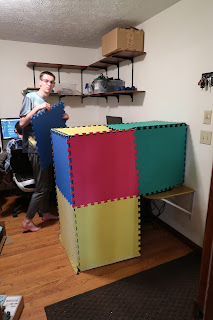 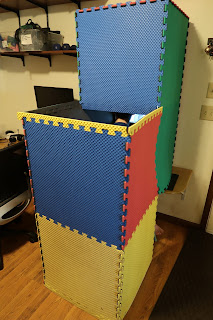 Posted by Laraba at 2:51 PM No comments:

Intelligence and Belief in God

I am hoping to write a series of philosophical posts about God and Christianity and intelligence and science.  Making time is challenging but I figured I might as well start and see how it goes.

So this post is about intelligence and belief in God.  Obviously.  Because of the title of the blog post :-).

There are billions of people on the earth and some of them are very smart and some are very intellectually limited and then there is a huge range in between.

Being limited intellectually, by the way, isn't meant to be an insult. God loves intellectually disabled people with a special love, I believe. Their faith is often very pure.  God has a lot to say about the faith of little children and I think that includes individuals whose minds are like children even as adults.

It is sadly common among scientists to say that "believing in God" is stupid.  That only idiotic people would believe in  miracles, in a virgin birth, in resurrection, in the basic core foundation of Christianity.

This is the truth, though -- no one, no matter how intelligent, is entirely rational in his or her beliefs.  No one.  We all are emotional and spiritual beings. We all have a past. We were all raised in certain ways. We were exposed to certain things.  We have certain bents.  Believing in God is not just an intellectual exercise, it is extremely emotional as well. If there really is a God out there, then that changes our place in the universe in profound ways. Some people, like me, find that comforting.  Others find it revolting.

I grew up in a Christian home.  That was my foundation.  But neither of my brothers is a practicing Christian, so obviously that wasn't the whole answer as to why I am a believer in Christ.  But it is a factor, for sure.

I reject that intelligence, in and of itself, is a reason to believe someone's conclusions about God.  An intelligent person may well be able to understand deep things that others cannot.  A genius certainly can understand things that I cannot.  BUT even a genius has his or her own worldview.

I am a pretty smart cookie.  I have a Ph.D. in engineering.  I did extremely well in college.  I have a scientific bent and am, I think, a quite logical person.

I appreciate my intelligence because there are things I have studied and can understand that help bolster my faith.

But if I say to someone, "Well, I have a Ph.D. and I know that Christianity is true because I'm smart" I hope that person would flog me with a wet noodle.  That is not enough.  I mean, we can talk about the science (I intend to in future blog posts) but just my stupid Ph.D. isn't enough to prove I am right.

Many smart people have been, and are, wrong.  That is reality.

So I guess I'm saying, let's be humble.  Let's also not trust that someone knows what he or she is talking about scientifically, socially, etc.  We need to ask God for wisdom (if we are so inclined) and seek truth.  Scientists from all walks of religion have contributed valuable things to our understanding of the universe.  But let's be clear -- being religious doesn't make me stupid.  Being an atheist doesn't make you (if you are an atheist) stupid.

Part of me just r..e..l..a..x..e..s on January 2nd.  We have so much going on at the end of the year and then New Year's Day so today it just feels good to rest a little from so much celebrating.

We had so much to celebrate though!!! 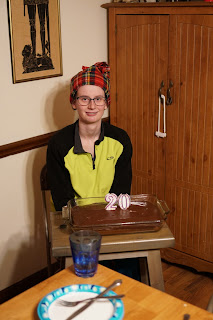 Naomi is 20.  How can she be 20?  I am sure countless parents have thought the same thing a billion times but REALLY!  I remember when she was born like it was yesterday!  She was 5 lb 15 oz of adorable cuteness.  Now she is all grown up, working, studying for a security test which should help her get another job, and is saving for a car and an apartment and all those important adulty things. 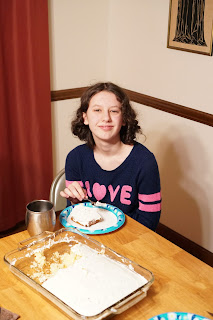 Miriam is 14!  She was also very cute at birth. Of course.  People say newborns aren't usually that cute but MINE WERE.  She was our biggest girl baby at 6 lb 12 oz.  Obviously we had little babies.  Miriam is precious, beautiful, vital, and so much fun to have around.  Like all of our girls, she is quite an artist. We love our kids.

Posted by Laraba at 7:35 AM No comments: 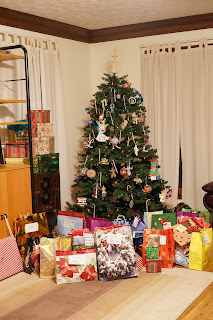 The tree on Christmas Eve 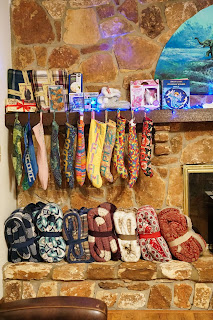 The stockings and other gifts. 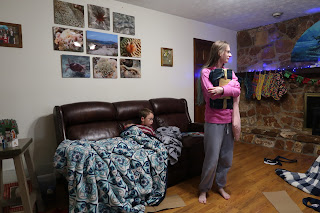 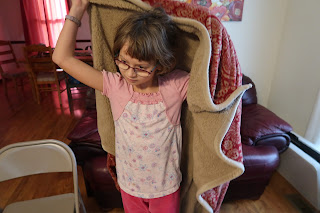 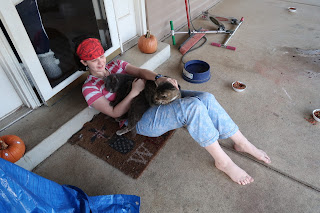 Lydia with 2 male cats who grudgingly shared her lap for the sheer joy of being with her.  The weather has been absurdly warm -- it hit 60 yesterday! 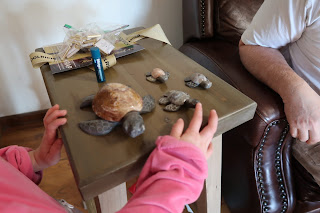 I bought these 3 little turtles for Kevin, and they joined the big turtle we already had. 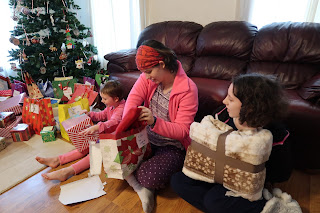 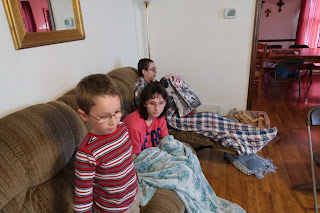 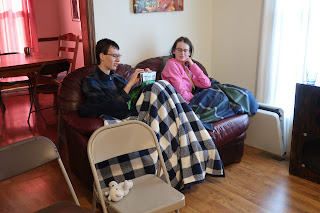 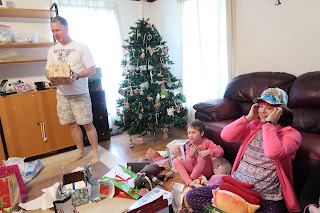 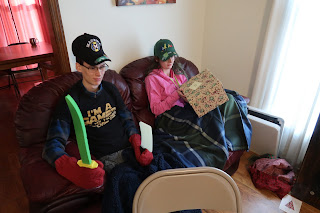 Naomi gave Isaac an awesome shirt which reads, "I'm a Gamer, Like My Father Before Me".  Star Wars reference. She also got me an awesome Star Wars shirt but I don't have a picture. Yet. 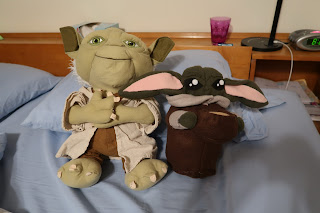 I am now the proud owner of a Yoda and a Baby Yoda!

Posted by Laraba at 8:16 AM No comments: 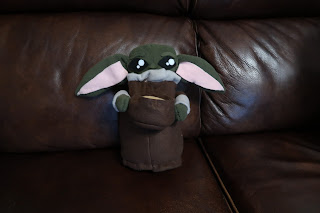 I'm rather snooty where Star Wars is concerned. I love the Original Trilogy. I thought the Prequel Trilogy was Ok though I despised Jar Jar Binks.  Oh my, terrible.

I loathe the current trilogy, whose final film is coming out in four days.  I'm Ok with people liking the Force Awakens and the Last Jedi. I just don't.

Anyway, Disney is producing a show called the Mandalorian and Kevin and I are thoroughly enjoying it.  This is a surprise since Disney is responsible for the horror that is the Last Jedi.  (I wasn't thrilled with The Force Awakens but it was Ok.  The Last Jedi?  Yuck.  Urgh. Ack.  Hack.)

The Mandalorian is well done and interesting but the really important person is not the Mandalorian himself, but The Child, also known as the thoroughly adorable Baby Yoda!

Not really Baby Yoda.  It is a child from Yoda's species.  It is so cute.  Oh my.

The pic above is a little Baby Yoda plushie made by, you guessed it, Lydia. That girl has serious skills. 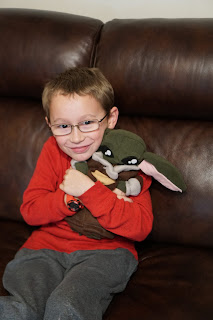 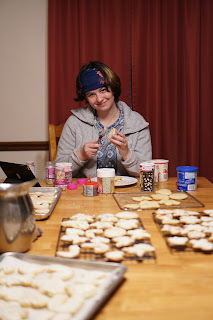 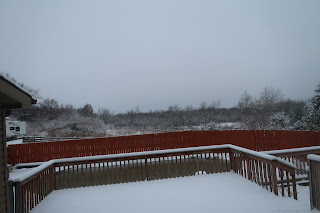 It snowed.  Now it is snowing again. Maybe we'll get some ice tonight as well.  Yeah, the weather is dicey.  Good night to stay home. 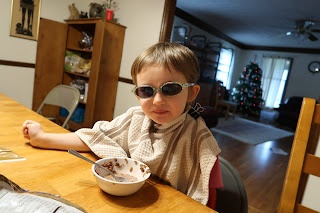 Don't even ask me why this girl is wearing sunglasses at the breakfast table. 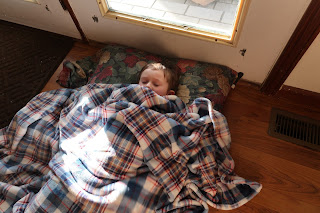 She's not really asleep. She's pretending to sleep.  Because what kind of self respecting 5 year old sleeps during the day?? 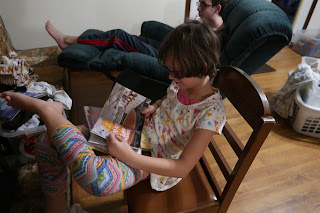 This picture represents a triumph.  Sarah and Daniel are good readers but they just want to read Garfield and Calvin and Hobbes and Smurf books.  Oh, they like PJ Masks books as well.  However, I wanted them to read something different.  So I returned most of the comic books and got a whole bunch of factoid books.  For a few days, they held firm but today both Daniel and Sarah are eagerly reading the books and reading them out loud to me.

I'm tuning them out right now so that I can type and make sense at the same time.

I am glad they are reading something different.

Posted by Laraba at 6:48 PM No comments:

Ok, today I'm going to tackle the other side, the pro-vaccine people.

I read that the World Health Organization reported that 140,000 people died of measles in 2018.

And I thought, wow.  Just, wow.  That is an incredible number of people!  Obviously measles is a really dangerous disease!

I dug in a bit.  So that was totally and completely an estimate, based on some kind of models.  Not actually reported measles deaths.

There have been measles deaths.  The Democratic Republic of Congo (DRC) is in the midst of a horrifying epidemic and over 5000 people have died of measles, most of them children under age 5.

I believe vaccination is a great thing, I do. I really do. Polio mostly wiped out here in the United States, and these widespread outbreaks are only happening where vaccination rates are low.

The World Health Organization (WHO) is, I believe, very much at fault publishing figures based on an 'estimate' from some 'model'.  It makes anti-vaccine people nervous, and I don't blame them.  Just stick to the facts, gentlemen and ladies.  Count up what you really know, the reported deaths in each country, and add them together.  That number will be enough to worry a lot of people authentically.

Based on a MODEL?

I understand they are trying to scare people into vaccinating but they shouldn't.  I hate dishonest reporting in pursuit of some desired event, which in this case is vaccination.  There is a good argument for vaccination in at least poorer countries based on what has happened in the DRC.

Be honest, dudes.
Posted by Laraba at 7:54 AM No comments: